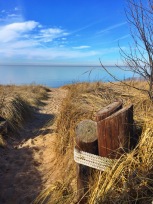 We are heading into our 6th consecutive day of 60+ degree weather in Chicago. That’s the longest stretch on record for February (ever!) and today (Day 6) also marks a Chicago record for meteorological winter — encompassing the months of December, January, and February.

The mood of most Chicagoans has palpably lifted (blue skies and warmth tend to do that here), but I can’t help but feel a sense of foreboding. Having lived in Chicago for more than 25 years, cycling along a glimmering (iceless) blue lake in February just feels…wrong. Kinda like dancing on the Titanic as the ship goes down. I’m not saying we should hole up inside and feel threatened by a sunny day. But let’s keep in mind what these unusual weather patterns mean. Climate change is real (you will hear me say this over and over again). This week we are celebrating the novelty of no coats and al fresco dining, but let’s keep in mind that warmer winters may also be a harbinger of things we *don’t* like/want, as reported this week in the Chicago Tribune: (http://www.chicagotribune.com/news/local/breaking/ct-global-warming-chicago-mild-days-20170118-story.html. Accessed Feb 21, 2017):

On average, Earth will have 10 fewer days of mild and mostly dry weather by the end of the century, the researchers estimate…

Any change depends on where you live and the time of year. For example, on average, the U.S. will lose nine mild summer days by the end of the century, although most is gained back with more mild days in the winter, spring and fall. The report estimates that Washington, Chicago, New York and Dallas will lose two weeks of pleasant summer weather but some is gained back. On average, Washington loses 13 mild days; Atlanta, 12; Chicago, 9; Denver and New York, 6; and Dallas, 1.

The biggest losers will be the tropics and nearly all of Africa, eastern South America, South Asia and northern Australia. Rio de Janeiro, on average, will see 40 mild days disappear. Miami will lose its only mild summer day and nearly a month of spring and fall mild days by 2100.

So in the short-term, Chicago may not suffer too terribly from global warming (losing about 9 “mild” days per year), but what is our social responsibility to other parts of the world that will be impacted more severely? Do we just shrug and say, “Sucks to be you,” or do we step up and make changes? Many of our elected officials proclaim that they care about the environment, but their actions say otherwise. Call, write, march, talk to your neighbor. Don’t stand by and sink with the ship.